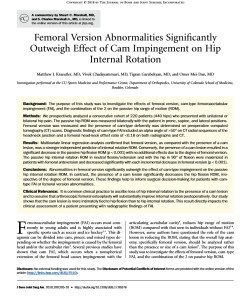 Femoroacetabular impingement (FAI) occurs most commonly in young adults and is typically associated with specific sports such as soccer and ice hockey. This diagnosis can be divided into cam, pincer, and mixed types depending on whether the impingement is caused by the femoral head and/or the acetabular rim.

A detailed study was performed was to investigate the effects of femoral version, cam-type femoroacetabular impingement (FAI), and the combination of the 2 on the passive hip range of motion (ROM). The researchers performed a single-center prospective study of a consecutive cohort of 220 patients undergoing hip arthroscopy.

These results demonstrate the importance of evaluating the overall hip anatomy, including femoral version, in patients presenting with symptoms of impingement.

Cam-type FAI results from a non-spherical extension of the femoral head causing impingement against the spherical acetabular cavity. Patients with a cam lesion often have pain and a reduced hip ROM, specifically internal rotation.

Traditionally, surgical treatment of FAI required surgical hip dislocation. In recent years, arthroscopic treatment of FAI has become the norm, with a number of studies showing successful outcomes in terms of reduced pain levels, improved function, and return to sports.

In addition to successful pain relief and improvements in functional outcomes, hip arthroscopy for patients with cam-type FAI has been shown to result in significant increases in ROM postoperatively. 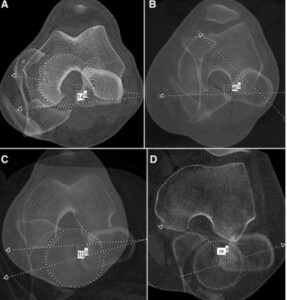 When a patient presents with symptoms of hip impingement, the surgeon should evaluate the overall anatomy of the hip, as hip impingement is a multi-factorial diagnosis that may occur as a result of a combination of cam-type FAI, abnormal femoral version, acetabular version, and/or acetabular osseous coverage.

When a patient has femoral retroversion, the surgeon may consider offering procedures such as a derotational femoral osteotomy in place of, or in addition to, arthroscopic management of cam lesions. Future studies should be performed to compare the effects of cam resection, derotational femoral osteotomy, and a combination of these procedures on improvements in hip ROM, pain, and functional activities.

Cam lesion seen on a cross-table lateral radiograph with measurement of the alpha angle (Fig. 2-A) and on a 3D CT scan (Fig. 2-B).